History of the monastery and the church

The Franciscan Church and Monastery in Szécsény

The monastery and the church were founded by Tamás Szécsényi, Voivode of Transylvania, upon permission from Pope John XXII issued on 9th May 1332. 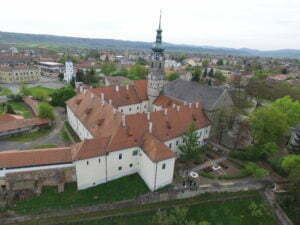 The church was dedicated to St. Mary and consecrated in 1334. The sanctuary of the church, the chapter house, which now serves as the sacristy, and the room above it (now called Rákóczi Room) bear testimony to the Gothic building period in the 14th century.

The monastery was continually enlarged in the 15th century, and the steeple was also built then.

The 14th and 15th centuries were the heyday of the Franciscan spirit and the order. The Franciscans founded a school in the monastery, and ran a poorhouse and a hospital, while they also copied codices. János Hunyadi and King Matthias also visited the monastery (the latter in 1461). 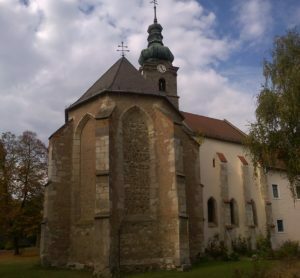 Over the course of these centuries, first the fights against the Hussites, then those against the Ottomans caused a lot of suffering to the inhabitants of the town of Szécsény and the monastery. The Ottomans first dominated the town between 1552 and 1593, then between 1663 and 1683. During this period, they converted the sanctuary into a mosque, the nave of the church into a stable, the sacristy into a bath, and the bey used the Gothic room as his living room.

John III Sobieski, King of Poland, liberated Szécsény from the Ottoman rule in 1683. The superiors of the order positioned János Bárkányi, the educator of Francis II Rákóczi, in Szécsény. He found the monastery and the church in a ruined, burned-out state. He rebuilt the building complex.

An important event was the meeting of the Hungarian Diet, held in Szécsény in 1705, which elected Rákóczi to be the ruling prince. 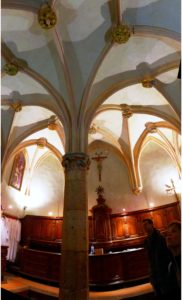 In the course of the following centuries, conflagrations and epidemics caused suffering, then the policies of Joseph II restricted the friars’ activities.

The furniture of the sacristy, the altars of the church and its organ were completed in the 18th century. The works were supervised by Franciscan friars Márton Spiegel and Liboriusz Oszler.

In 1950 the friars were deported from Szécsény. For 40 years, there were no Franciscans in the monastery, which housed an agricultural secondary school and dormitory. The friars were only allowed to return in 1989.

At present, the building functions as a parish and the novitiate (the house of formation) of the province.

Back to the main page

Visitor information
Accessibility and opening hours of the monastery and church.
See more